COMMENTS: The first song on Tori Amos first real album is a song of personal realization. She is a particularly twisted chick, but she's got a brain in her head, conservatory musical training and a willingness to let it all hang out emotionally. Broadly, this song is about owning up to her own psychic perversity.

This is a premium example of her basic style, which is oddly difficult to classify. It doesn't seem like she should be so hard to classify; she's writing more or less normal songs - it's not like she's Captain Beefheart or something. Hell, even Beefheart is relatively well described as singing a kind of blues. Tori doesn't quite fit the normal categories.

The nearest way I can describe this is as a "power ballad," though there's no way you would mistake her for Bon Jovi or Poison. She is way too musically sophisticated to just start pounding blunt rhythms based on two or three basic chords. Her graceful melody and dynamic rhythms tend to make me think of it as a "ballad." However, her rhythms make me want to dance and pump my fists to the beat way more than those other idiots whose names cannot be mentioned twice in one essay. It is noteworthy that she has frequently covered or carried on about heavy metal type bands, notably Nirvana and Led Zeppelin. You might say "Crucify" is a ballad in much the same way that "Stairway to Heave" is a type of ballad.

The emotional content runs a gamut of internal turmoil. From the start, she is describing a public panic attack. "Every finger in the room is pointed at me." The BOOMs punctuating the verse are mostly only simple acoustic piano chords, their meaning amplified by the context. There are calmer, more reflective shades. ("you're just a cage girl...") Then there are expressions of frustration (with herself, mostly). "Nothing I do is good enough for you." 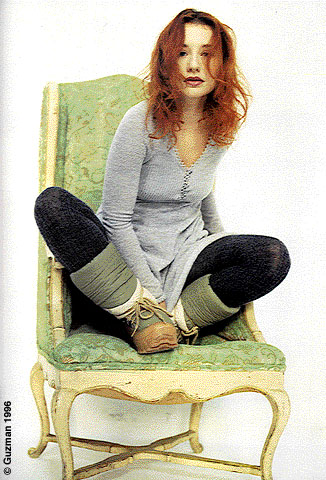 The lyrics describe this state sometimes directly and some times metaphorically as religious. She seems to think of religion as largely an avenue for co-dependence and masochism. "I've been searching for a savior in these dirty streets, looking for a savior beneath these dirty sheets." She's looking for someone to sacrifice herself too. She sees this, and reduces religious ideas as a kind of masochism. Yet even knowing better she ends the song with "Please be, save me, I cry."

Again as elsewhere, my description of her work sounds like the work of a hopeless, pathetic whimpering neurotic, but it absolutely is not. There is a power in her presence that will not be mistaken for the work of a wimp. It's more like bravely facing your demons publicly. Neither the melody nor the lyrics are helpless, but more like a boast of how far she'd come.

"I've got enough guilt to start my on religion."