I Shot a Family Member Today

Though I sometimes speak in religious metaphor, I'm not really much of a believer in God. Yet sometimes things have to make me wonder, such as the situation here on the farm this week with our dogs. I wrote recently about being God to our animals, and needing to take the responsibility to kill them sometimes.

I've never in 42 years actually had to make such a decision though, but just a few days after writing about such things I got circumstances handed to me like a test from Yahweh. At the tail end of a lovely weekend with the godson and his mama, I got a call from home explaining that Ramblin' Jack had nearly killed my beloved terrier the Fugitive. 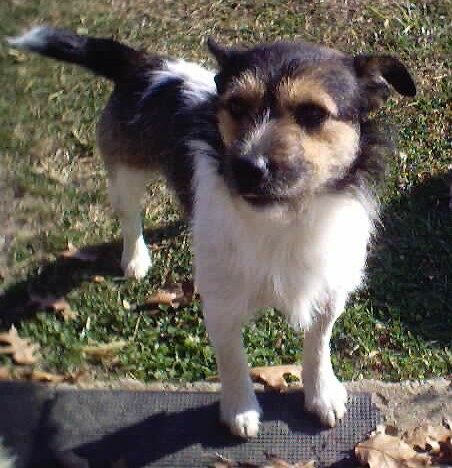 Ramblin' Jack just rambled onto the farm a few months ago. That's how almost all of our dogs ever arrive. The other dogs didn't want him there, but we humans run the place, and we said the poor fellow could stay.

Jack was some kind of bulldog, as we could see from his powerful jaws. You could also tell it by his aggressive behavior in the yard with the other dogs. After the first few days hiding under bushes this spring, he figured on taking over the place, at least as far as dogs were concerned. He was probably 40 pounds and the Fugitive maybe half that.

Now, the dogs will fight over the food bowl, or scraps or general status. A little tussling in the yard is expected. But never have we had a dog ready to absolutely kill the others. Jack about killed the Fugitive but for serious human intervention several times.

A couple of months ago, he went into kill mode on the Fugitive right at my feet as I was going out to take my walk. The 70 pound coon dog Rouser couldn't get him off, nor was poking him with my walking staff making any impression. I absolutely busted my favorite oak walking staff in two across his back- and didn't even get his attention. I busted it in two again, and then kicked him pretty good before he even noticed I was there.

The next day, I called the vet and scheduled his neutering. Hated to do that to him, but I figured that'd ratchet him down a notch or two. He got his shots, and fixing, and put back in the yard. I was told it might take a month or so for the behavioral effects to be fully manifest.

It did seem to settle him down for a minute. Doc figured him for just about a year old. He took out his last baby teeth. But he wasn't quite full grown, and he has since gotten bigger and again more aggressive.

Monday morning, I was just concluding a lovely weekend with my tough little godson and the Thug's Ma when I got a call from home that my Fugitive was hurt. It took three men to get Jack off my little terrier. The old man locked Jack up in our basement, and wasn't going to say the obvious. He was waiting for me to name it.

Ramblin' Jack needed to be put down. The neighbors had already volunteered to do it. It's not their dog, so they don't have emotional attachments to him as a pet.

I do. Jack had been rough with other dogs, but had never in my knowledge so much as looked cross ways at a human. He loved me, and was routinely the first dog to find me coming back from having been dropped off for my walk. There's no doubt in my mind that anyone intending me harm would have to kill him to get to me.

But he absolutely couldn't live with the other dogs. It was perfectly clear that he was going to kill the Fugitive, and eventually the rest of the dogs. He was just a natural born killer, and there was no changing that. Plus, being that aggressive, he was just flatly going to be a danger to humans eventually.

I stopped at K-Mart on the way home and bought a 20 foot dog chain. It was dark by the time I got home, and we didn't discuss the matter further. Fugitive was hiding under the other car when I came in, and wouldn't come out to see me- which meant he was badly hurt and traumatized. Even ol' Rouser had a big open hole from those powerful jaws.

Early this morning, I took Jack out of the basement and chained him up in the woods. I came back to the house. I got a bolt action .22 rifle, went back to the woods and put a bullet between the eyes from about a foot away. He fell over dead without so much as a yelp. His legs twitched slightly a couple of times, but they were still within the maybe three seconds it took to work the bolt and put another cartridge into the chamber. Still, I put another shot in from under the chin just to make sure I wasn't leaving him to suffer. Then I went back to the house and made morning coffee.

Additionally, later this evening the neighbor boy told us that Jack had been biting at his ankles recently as he rode his quad down the lane. This was the only time I heard of aggression with a human, and it reconfirms my calculation that he was going to become a danger to humans. However, I only heard this a few hours after I had already put the dog down, so it didn't enter into my reasoning.

The neighbors would have done it for us, but that didn't really seem right. It was a Barger dog, and it was for me to do. I'll do my own dirty work. Likewise with family. If I had been Ted Kaczynski's brother, the guy would have just quietly disappeared like Dutch's alley cat.

Plus, it would be making too much production to bring the neighbors in, and I wanted to know that it was done right. What I would have imagined of the final scene would have been a lot worse than what I know it to have actually been from just taking the responsibility to do it myself.

As it is, I know Ramblin' Jack went instantly and painlessly. He didn't have a clue what was coming. One second he was, and the next he simply was not. I can only pray that my own end is so quick, unexpected and painless when the day comes.

I had one other option: I could have kept Ramblin' Jack on a chain for the rest of his natural life. But dying isn't nearly as bad as living on a chain. I wouldn't want to do it, and I wouldn't put a dog through it. I used to get grief with the grandparents for letting their dogs off the chains. I've said for years that I'd shoot a dog before I'd make it live on a chain. As you can see, I meant it.

I got no pleasure from having to kill a pet, but I will admit to being pleased by my neutral emotional response. I'd never purposely killed anything bigger than a bug, other than maybe a few fish. I was tore up for a week when our Cujo dog came up dead in the yard, and we hadn't had him as long as Ramblin' Jack.

Yet I took this dog that I liked pretty well, and put two bullets into his brain- and I don't feel bad about it really at all. I would describe the experience as mildly distasteful. My friend anguished a bit about killing her cat, partly because it was perhaps a marginal call. Ramblin' Jack, however, was not a marginal call. He was just too dangerous to live. I protected my Fugitive and the rest of the family. The end.

God and Country index and explanation